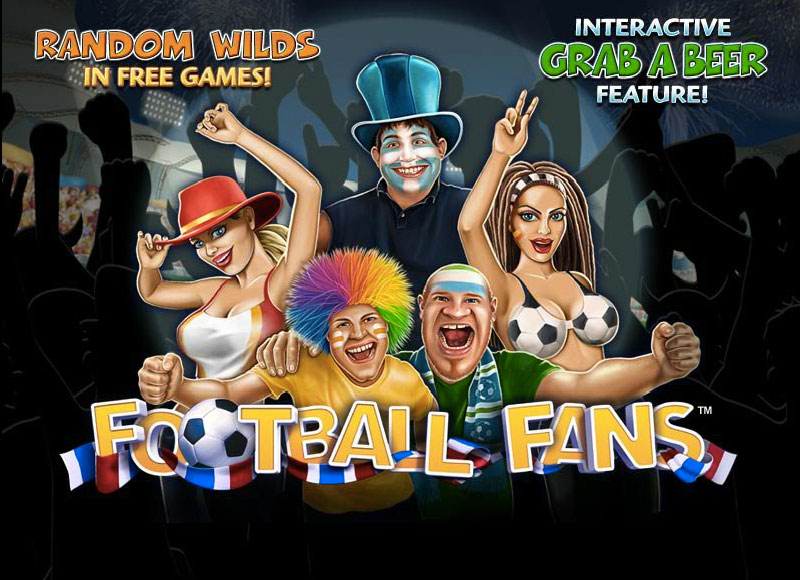 We can name quite a lot of slot machines based on different kinds of sport. But there are really few of them which are based on the favorite sport of Europeans – football. Football Fans is one of these slots. Developed by Playtech, it has easy gameplay and colorful design. There is also an option to choose which national colors will cover the reels (but this choice is limited, so football fans from such countries as Germany, Italy, Spain, Brazil, France and Argentine are the luckiest).

A few words about the symbols. If you are already familiar with some Playtech slots, you surely know that the lower value symbols are common for the products of the company. Higher value symbols is a different story. During the game, you can come across a scarf, a cold beer, a group of football fans, an air horn or beautiful girls-supporters. The scatter symbol is the main slot logo.

The game wouldn’t be so funny and profitable if there were no bonus features. So, let’s shed some light on this aspect of the slot. First, feature which is worth our attention is the Grab a Beer feature. To activate it you have to trigger the Cold Beer symbol exactly where a gold ring with a label “cold beer” is situated (you can move it wherever you want or just leave it on its starting position). Like that, you can triple all your winnings.

Another one is the Penalty Kick feature. It can be the most profitable, but of course, you should be lucky enough to get it. So, it will be activated once you have 3 scatter symbols on the reels. They will provide you with 15 free spins to win without betting. The slot also offers a possibility to retrigger free spins in the case of appearing another 3 scatter symbols (but this time you will get 10 free spins).

So, let’s make some kind of conclusion. Football Fans slot machine in the first place will satisfy football fans, but you can try it out anyways. There is a demo version of the slot which gives a chance to play for free. But don’t forget that you play Football Fans not only for pleasure but also to get a reward. And wich reward you’ll get – it depends on you.