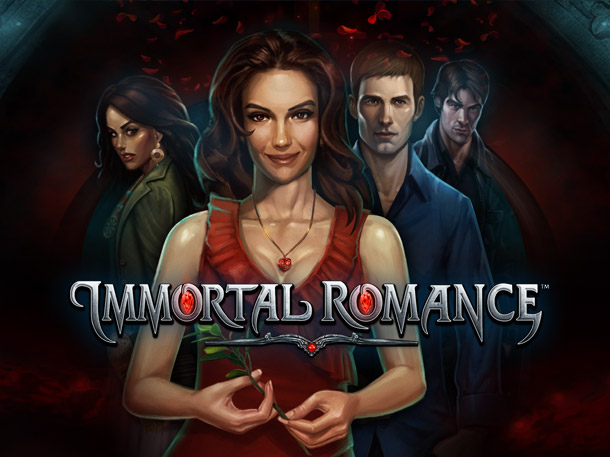 Immortal Romance is a slot machine developed by Microgaming. It tries to tell a vampire story about a whirlwind romance in dark and gloomy tinges. With 5 reels the slot offers you 243 ways to win. If you are lucky enough, you can hit the jackpot which will bring you 60 000 coins. You only have to gather 5 Lion Door Knocker symbols but of course, it happens not so often. By the way, a top payout which Immortal Romance offers is 3,645,000 coins – sounds impressive, doesn’t is?

Instead of the jackpot, there are some bonus features available during the game. Firstly, it's worth mentioning the Wild Desire feature. It can be activated randomly and turn wild all of 5 reels of the slot machines. But the Chamber of Spins feature is undoubtedly head and shoulders above the other. It consists of 4 levels. Each level has its own character who is some kind of the representer of the feature. Their names are Sarah, Amber, Michael, and Troy.

Amber is a representer of the first level. If you activate this feature for a few times, you will get access to the second level and so on. Let’s discover the advantages which are available on each level.

Amber feature is activated when there were up to 4 feature triggers. In this case, you’ll get 10 free spins (by the way, they can be easily retriggered) and your reward will be multiplied by 5.

Then goes Troy feature (up to 9 feature triggers). It gives you 15 free spins and a special Vampire Bats feature, which can multiply your cash reward by 2 or 3 (or even by 6, if you are lucky enough to get 3x and 2x multipliers simultaneously).

The third one is the Michael feature which offers 20 free spins and an activating of the Rolling Reels. This feature can increase your reward with a help of the multipliers from 2x to 5x.

And the last level presents the Sarah feature which becomes available once you’ve got 15 feature triggers. 25 free spins will be your reward as well as the Wild Vine feature with its ability to turn wild different symbols absolutely randomly. There is also a chance to get 4 extra free spins by gathering from 2 to 5 scatter symbols.

Immortal Romance is a brilliant slot machine from Microgaming which has a little bit sophisticated gameplay but offers you a great number of bonus features. That’s why you have to try it out whether in the demo mode or with real money.