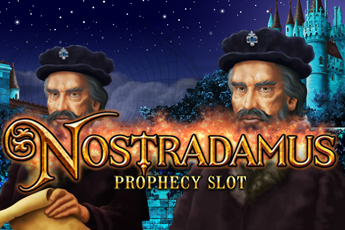 Everyone knows at least some facts about great French seer Nostradamus. He lived in 16th century and, according to his contemporaries, spent the entire life trying to predict the future for hundreds of years ahead. Some people really believe he completed this mission, they believe all his predictions even after 4 hundred years after the peer’s death. Very compelling plot for a film or, let us say, slot machine. It was exactly what guys from Playtech thought and here we are to present you the result of their efforts – Nostradamus slot machine.

Nostradamus has 5 reels and offers a great number of ways to win (243, to be exact). The traditional payline structure was completely removed, so you can win with totally random combinations.

The design of the slot machine is impressive: the atmosphere of the Middle Ages makes you believe you have been transferred in time. The image is fulfilled by black gloomy sky. As usual, all symbols are sorted into two groups. The first group includes symbols of lower value such as A, Q, 10, 9, J and K. Second group is represented by such themed things like a quill, a telescope, an hourglass, a parchment and the book of Nostradamus’ prophecies. A crescent moon is a Wild symbol, while scatter symbols are the Prophecy book and the images of planets.

The slot offers a great number of bonus features. The first one we want to discuss is the Planets bonus. It is activated in the case of appearing planets symbols on first, third or fifth reels. Each symbol will multiply your winnings.

Another feature is the Free Spins. Your task is to trigger at least 3 globe symbols anywhere on the reels, and doing so you will get:

And finally, you’ve got to know what these modifiers for. There are three types of it, and they are Lightning, Tsunami, and Earthquake. Each one will turn some symbols into Wilds and increase like that your chances to win.

The last bonus is the Prophecy Book feature. But bear this in mind – the bonus can be activated only if you bet £5.00 per spin and more. Prophecy Book includes cash reward each time it is triggered.

Nostradamus slot machine is a high-profile development from Playtech and you really have to try it out.