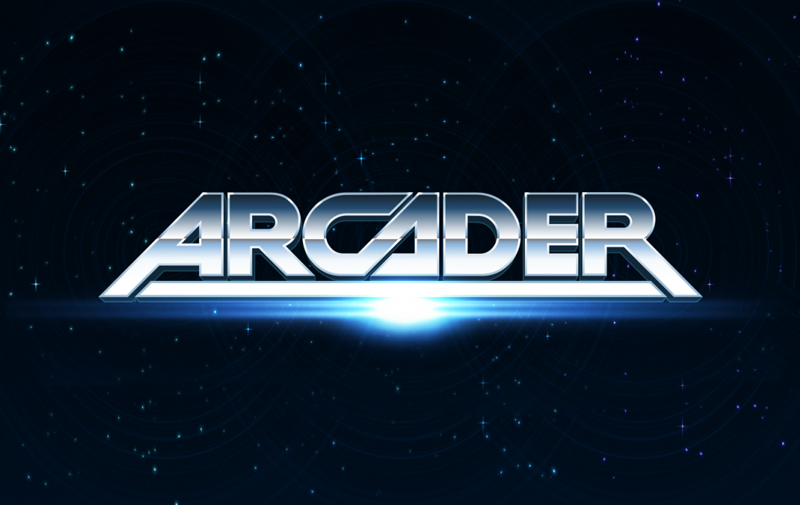 Arcade slot machine is customary to call computer games with obviously primitive gameplay. They are singled out as a separate genre and connected to them platformers. The developers of the Swedish company Thunderkick decided to make an excursion into the history and return the player in those times when such kind of entertainment got incredible popularity around the world, although their quality left much to be desired. Their new arcade machine Arcader is created in the image of eight-bit games, which have not been used for many years, but still find new fans. If the player wants to indulge in memories of how he fought with the joystick in his hand, then Arcader will be very interesting to him.

Description of the slot machine

At first glance, the interface is very unpretentious - all in the spirit of the arcade, but in fact the game attracts not only its primitiveness, but also the background on which an alien landscape is depicted. Looking at this slot and the classic Slot-O-Pol slot machine, you can not help noticing the cardinal difference in the representation of the fruit theme. Here gamers expect not only fantastic pictures, but also space showers of bonus games. The plot of the game will seem very familiar to many, because they will have an exciting journey into the past.

Separate attention deserves the color scale of Arcader: soft, muted tone screensavers and bright symbols, made in the form of a mosaic. As with the other Thunderkick gaming machines when setting up the game process (selecting bets, reviewing the winnings table), the gamer will not be distracting - all tables are displayed on a black background.

By the way, it's very convenient for developers to publish information with the rules of the game - it is executed in the form of a table, in addition, a description of all the buttons on the control panel is given.

The game starts simply: the bet is selected and a large button is pressed in the lower right corner. Nearby is the button for launching an auto-game, clicking on which you can select the number of automatic scrolls. To select a bet (BET button), developers present a convenient table that opens all possible options (from 0.20 to 100.00).

On the left side there are buttons, clicking on which you can get information about the rules of the game and about payments or simply turn off the sound. In the payout table, not only the coefficients of the winning combinations and the option of additional symbols are described, but also the structure of the active lines and the nuances of the bonus modes are indicated.

The goal of the game is to get a payout after stopping if winning combinations are dropped (from three or more simple symbols). The countdown starts from the first drum on the left. In the event that several combinations fall on different lines, payments on them are added together. Payouts on combinations depend on the bet you made, so before starting the player it is advisable to familiarize yourself with the possible options.

In the Arcader there are as many as two (!) Bonus games. Activate their special characters Bonus and Mistery. Bonus symbol is a symbol with the image of the letter B. The loss of 3 or more such symbols at any point of the playing field triggers 9 free spins with additional multipliers. In addition, the player receives one sticky Wild (only present on the 2nd, 3rd and 4th reels), which are stuck for the duration of the bonus game.

Mistery symbol - a symbol with the image of the letter M. Just like the Bonus symbol, when three or more of these symbols fall out, it starts a Mistery game with additional multipliers (Multipliers).

During the Mistery - game on the screen appears a field with precious stones in the form of a heart, a square, a drop and a circle. The player can make a choice until he opens the symbol with a cross - it means the end of the Mistery-game. Each symbol in this game has its own separate cost, which depends on the fallen version of the Mistery-game.

All bonus games are played at the same rate as the round in which they are activated.

The developers promise a return of 96.1% of the bets.

Thunderkick, of course, managed to create a model similar to the old computer games and, in addition, interesting. The Arkader can, of course, seem at first sight simple and unpretentious game, but behind graphic modesty the real monster on distribution of prize functions disappears. And to argue that Arcader is not able to remember is simply impossible. Moreover, today in the online casino market you can rarely find real Arcaders, so do not miss the chance to meet with the past of slot machines.