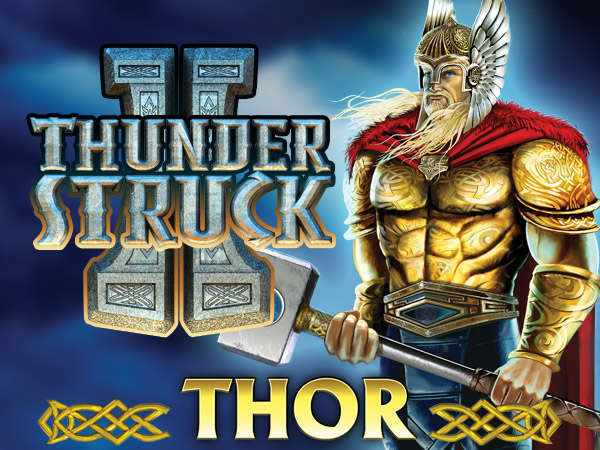 Thunderstruck 2 is very popular and interesting among all other slot machines. The design of the Slot Machine resembles an illustration of the ancient saga of the journey to Valhalla – here we can see the Viking ship Drakkar, the image of Thor Servants of the Valkyries, and all the major deities of Scandinavian Olympus.

The sound of this game also reminds that glorious, heroic, mystery time when mighty Scandinavian Gods were ruling the world. The Thunderstruck 2 has 5 reels, 3 rows, and a 243 playlines. The reels were nicely designed with the symbols in Norse mythology style and with some Scandinavian Gods such as Odin, Loki, Thor, and Valkyrie.

The game is controlled by four mythical creatures who will take you one bonus level higher if you win.
On the next level, you will meet cunning and greedy God Loki who can make your winning bigger but it won’t be too easy because he is a wise enough.
If you successfully pass Loki there is another God Odin is waiting for you on the next level who he is really generous, so you will have an ability to make your winning twice bigger or even more.

In addition, it the end you will have to play with Thor himself. As a result, you can make your winning five times more or lose everything.
Thunderstruck 2 is one of the best free slot machines developed by microgaming in 2010. Microgaming produces only high-level slot machines for the online casino. It is about not only graphic, a design of their games, sounds or payouts it is also about a gameplay and about the ease of playing.

Special symbols of the game

The main symbols are representing Nordic gods: Valkyrie, Odin, Loki and Thor. Each of them has unique characteristics that come out during the free spins.
The logo of Thunderstruck 2 is a Wild Symbol of the game that has an ability to replace all other symbols on the reels of the slot, the scatter of the game is the Bonus Hammer, which completes a winning scatter combination when 2 or more scatters appear on the reels.
Furthermore, the logo image will make your winnings twice more when wild symbol replaces another one in a winning combination. The logo symbol will stop being wild one during Wildstorm which can turn almost all the reels into Wild Symbols.

Play for free or for a real money

You also can play this game for free without registration or download to find out more information about the plot of the game and to know your abilities or also pay it for real money online to win some profit.
The casino ratings of this game are really high and casino reviews prove that this slot machine is rather interesting, an enthralling thing to try your luck on and to win a good money.