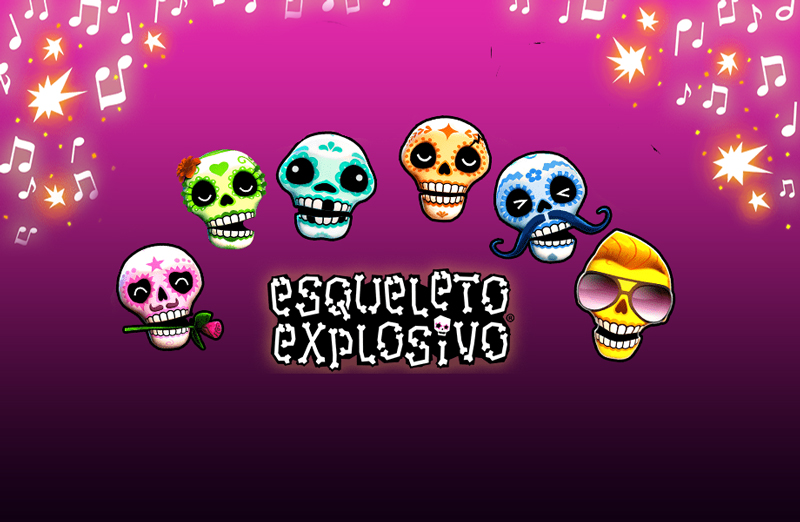 DESCRIPTION OF THE GAME

Parade of the Dead. These words most likely conjure up horrible pictures of the zombie apocalypse, when the bloodthirsty resurrected dead walk in search of a human BUT! The game Esqueleto Explosivo the exact opposite of the plot of every horror movie. A merry Mexican holiday in honor of all the dead is the main theme of this virtual slot. The slot will be interesting to fans of the slot machine From Russia with Love, and other devices in which the customs of different cultures and nationalities are revealed. Inspired by the theme of man-made home altars in memory of the departed into the world of another, the game is not at all sad: funny skulls continually play Mexican folk music, wink and noisily explode. Fidgety guitar transitions in the style of flamenco, castanets, maracas, copper pipes in the hands of skeletons with exploding heads are this not a real holiday of the dead? The interface of the game Esqueleto Explosivo is made in the spirit of the Mexican tribes: folk patterns on the turtles, colored lanterns, candles and, of course, the Mexican tights with the sombrero hats! Esqueleto Explosivo is very atmospheric, it both calms and kindles genuine excitement. For the sake of such a riot of emotions, it is worth playing.

Description of the design of the game

Colorful! The game Esqueleto Explosivo is made by a whole circle of colors, however, the game takes place in the dark, so the palette is more muted and does not cut the player's gaze. Excellent 3D graphics, animation, right now, at the highest level, in one word this gaming machine is developed by the latest fashion squeak on a powerful graphics engine. Skeletons, which are drums, sit at a luxuriously decorated table with flowers, fruits, candles, photos and drinks, each on their shoulders. In their hands, they are familiar with all musical instruments. Each shard on the skeleton is painted with Mexican patterns of pink, green, blue, orange and turquoise. The backdrop is represented by a quiet street somewhere in Mexico, a nook and cranny that is full of colorful lights on candles and other festive tinsel. In general, the painstaking work on the design company-developer of this game Thunderkick held the highest level: every curl of the Mexican folk pattern, every detail of the background makes the players without a memory fall in love with this luxurious video slot.

Description of the device interface

Online device Esqueleto Explosivo has 5 reels and 17 paylines. The drums look like skeletons without a head, on which a pile of skulls (game symbols) is piling up. The lines in this slot machine are fixed and always active, they can not be activated or deactivated, they just are. After drawing up a winning combination on any line, the combination of skulls-symbols explodes, and in their place come already other amusing shards.

The wild symbol in Esqueleto Explosivo is decorated with an entertaining smiling skull in cool glasses and with a hairstyle in the spirit of Elvis. Wild, with his immediate appearance on any drum, raises the multiplier to a new level and immediately explodes along with the 8 nearest symbols, opening access to the fall of new shards. These newly erupted skulls can form the next combination and explode again, and so it can go on forever, and the win multiplier will all grow and grow. Of course, a wild, as in many other machines, replace missing gaming symbols to compose a winning combination.

The minimum winning combination is 3 skulls of the same color on one line, and the minimum bet is 0.10 game coins. In general, the rates in Esqueleto Explosivo are fixed and are 0.10-100 coins. You can select a bet by clicking on the Bet label or on the game badge icon on the lower right of the game space. It is worth noting that the distribution of rates on the lines remains a mystery, the answer to which either producer themselves know, or these funny skeletons.

After making a bet, you can start the rotation of the reels. More precisely, it looks like a scattering of already existing skulls and a drop in their place of new ones. Start this wonderful process by pressing the large, rightmost button with the symbol of rotation.

Another significant feature of the slot machine Exploding Skeletons is a unique multiplier with several levels. The first payoff of the player will be multiplied by x1, then if the new shards in the place of the exploded old form a combination, the multiplier will already go x2 and so on, to the multiplier x32! These are huge mountains of virtual coins!

The automatic game starts the rotation of the reels and has standard settings in the form of a choice of the number of revolutions triggered by the game.

The structure of the lines, the personal multipliers of each symbol and the rules of the game can be seen by clicking on the button, which is at the bottom left and looks like a cube of dots.