Start to Play Heads or Tails 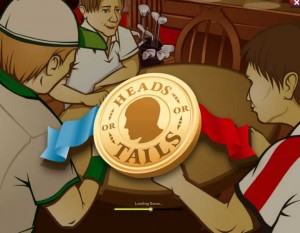 A game with the coin is one of the oldest in the world. It was popular in ancient Egypt, in 16 century of Europe and other countries. This game helps to find the truth and sometimes to decide the fate of someone. This game’s plot is very simple, but it doesn’t mean that it’s action is not interesting. The main idea is in simplicity.

On the screen, during Heads or Tails action you can see 3 persons. All of them are opponents. The situation looks like you are sitting in the bar and sudden appeared situation when you need to make a decision. Because of the slot machine’s main idea, they should choose one side of the coin. In modern casino rating, this game is the only one who has such simple plot and graphic side, which is always in the lead positions. It happened because this kind of free slot machines is able for everyone, who want just have some fun.

Sounds and their role into the game

Every online casino wants to present the best game with best sound accompaniment. If we talking about Heads or Tails, sound plays a huge role. It helps to feel correct emotions, which the main hero is feeling right now. Every win and every loose appear with the own sound, which helps a player to separate this actions.

What you should know about game’s symbols

In all casino reviews, you can always find information about most interesting free slot machines, which have many symbols. This game is special. Everything you need is just two coin’s sides. They play the main role. Downstairs you can see windows, which shows you balance and game’s results.

Developers and the story of success

How does such a simple game become popular?! Of course, it happened because of its popularity in a real world, but it is important to mention that without correct development it couldn’t come true. This game appeared with the help of Playtech. They become popular because all of their products becomes the best in the area of a gamble.

Is it real to play for a money

This simple game is a good chance to play in two different ways. They are: play for free or play for real money. You can try at first to play just for fun, and soon, when you will understand all features, you can try your luck.